From past few decades nations worldwide has undergone extensive changes with its natural environmental state due to the adaptive nature of people lifestyle in different nations across the globe. This is essentially due to the unplanned urbanization. To understand this context let’s focus on India as a case where the Urban conglomerates like Delhi, Kolkata, Chennai, Mumbai and Hyderabad have reported to be the immense amounts of pollutant emitters into environment from their chief sources such as automobiles, building construction activities and industrial chimney wastes etc.. It is important to note that this scenario of emissions will worsen when the existing population of urban area of 31% (2011 census) would grow to 50% by 2030 as estimated by world bank. This increase in population is making cities overcrowded eventually extending the boundaries of the cities, now the interesting fact here is that ‘Sources say, the physical space occupied by cities is growing faster than the population’. The nature of sub continental urbanization was revealed in satellite analysis of night lights, with urban areas growing by more than 5% per year compared to population growth of under 2.5% per year. This increase in urbanisation has led to depletion of green space around the urban areas leading to chaos with respect to its Space, form and functional aspects.

In association to this what possible solutions can we think of to address these issues which has many attributes related to social, economic and environment in urban societies? Perhaps rather planning on experimental strategies, we can see some real time practices that worked across Urban cities in addressing these problems as ideal way of approach to sustainable living.

Here are few vital parameters of urban societies which are discussed with respect to the below concerns:

“Cities have the capability of providing something for everybody, only because, and only when they are created by everyone” – Jane Jacobs.

When we see the insightful nature of this statement, it primarily talks about the integrity which drives the very motive of the sustainable cities. Now to suit this context in the broader terms of planning, integrated urban planning will be the appropriate approach to address the problems that urban cities are facing in present times. Talking about the problems lets us understand how these problems arise.

Talking about the densely populated nation like India which poses 31% and above urban population as mentioned earlier straining an already stressed infrastructure needs addressing the challenges of Transportation, Physical Infrastructure, improper neighbourhood planning and Coastal zones. When the physical infrastructure and neighbourhood planning fail to delivery required functional aspects it  may turn the living conditions of urbanites to hazardous state as urban cities which took form of a viral disease now a days turning into vulnerable, as the more complex they become, the greater impact on their surrounding areas will take place”.

Urbanization is the indicator of positive economic development, with integrated urban planning it can offset these urban problems. India can overcome these problems vis-a-vis leading to sustainable living. Carbon emissions and pollution reduction from urban activities is the spin of benefit of such an integration. The concept of Integrated Urban Planning represents an overarching challenge; includes addressing social, environmental, and economic concerns of urban areas, along with the interlinks between them. The following information talks about the causes and the possible solution for the challenges that were mentioned by quoting few real time examples.

From early 1991 there has been significant impact on urban transportation with respect to its functional aspects. Due to the Globalisation, emergence of software and services outsourcing industries in India which changed the living scenario of urban spaces attracting many migrants till date with its further development in various industrialisation making the cities compact with different transit systems with 24×7 flow causing to rise many environmental problems by emitting immense amount of co2 into the environment and serious road accidents, because of the improper transportation pattern.

So, these issues are resolved only when the policy makers and the government bodies design in such a way that it reduces the need to travel by personalized modes and boosts public transport and effective use of the land-use planning is made. Below are few sustainable strategies that can be integrated in the planning for effective land-use transportation.

Modals similar to the above have proved extremely effective, one example we can take is from Barcelona, Spain which is called super block modal having integrated sustainable approach in designing a neighbourhood as shown in the fig below.

You can visit the link provided for a quick review on the brief details about this modal https://depts.washington.edu/open2100/Resources/1_OpenSpaceSystems/Open_Space_Systems/BarcelonaCaseStudy.pdf

The land use planning in India need to be scrutinised with respect to its implementation of design to avoid the failure of the design implementation, as in case of  Delhi Bus Rapid Transit system which turned out as a failure because of the Lack of enforcement, Improper planning of bus platforms and longer traffic signal cycle times

Cities are undergoing unprecedented changes and urban development and it is already the time to integrate health principles. Cities need as much green infrastructure as possible, given how dense and impermeable they tend to be.

The concept of Green Infrastructure is to enhance the infrastructure facilities of the urban features in an environment-friendly manner to lead sustainable development. As the urbanisation thrives for classy infrastructure which will consume lot of energy and resources has to be minimised by deploying solutions that are energy efficient and reduce burden on conventional resources for example,

For Example Flyovers and Vehicular Underpasses: Flyovers inevitably have major visual impact implications, generally being unattractive and blocking view corridors and views to specific buildings. Where appropriate, mitigation measures such as using climbing plants, or other visual interest should be adopted to minimize adverse quality of air along with visual impact and also proven as a design to avoid accident to the vehicles coming from opposite direction by cutting the light glare which directly hit the drivers. 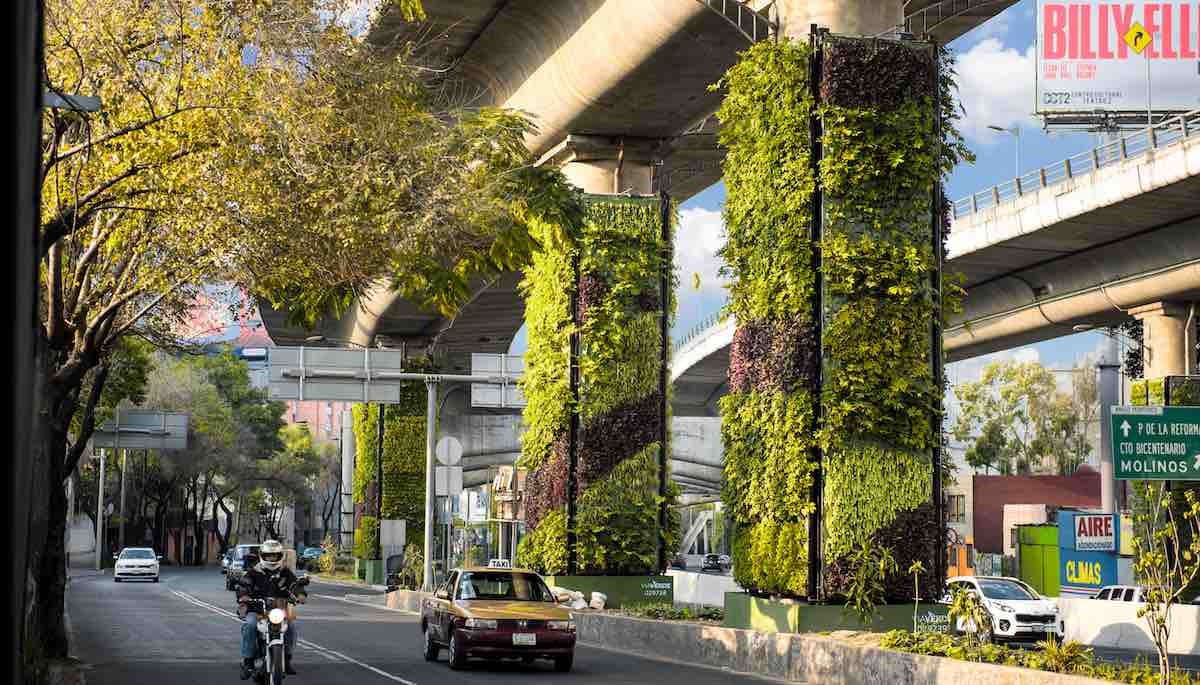 Fig 2a: Vegetation growth for flyover to improve green space and Picture showing the vertical vegetation over flyover bridges in Mexico.

Apart from the above points, Green infrastructure essentially focuses on managing the water associated ecosystem. The role of Green Infrastructure here is highly interdependent, for example, societal wellbeing in coastal and river areas depends on flood retention by wetlands or natural drainage systems, which in turn depend directly in the provision of ecosystem services, such as soil and water regulation. These, in turn, are highly reliant on biodiversity to uphold the health of the ecosystems to provide ecosystem services.

India which has around 7500 km of sea coast supporting almost 30% of population besides it by virtue of the resources and productivity that they hold, also has the Coastal zones of urban areas in it such as Chennai and Mumbai which has most of its boundary line shared with the sea is subjected to very vulnerable conditions. Fishing communities who inhabit the coastal areas are also threatened ironically, from conservation on one hand and development on the other. The CRZ has to be refined as such its aesthetics and the diversity should revamp the coastal urban areas.

Functional diversity maintained from the sites along the waterfront should be reserved for cultural, tourism-related, recreational and retail activities. An active waterfront with diversity in activities and functions should be created to introduce a sense of enjoyment. Incompatible land uses such as cargo handling uses which would obstruct the continuity of harbor front promenade, and major infrastructure projects such as roads which create a visual and physical barrier to the open water, should be at appropriate offset from the coastal line Where practicable, continuous waterfront promenade should be provided for public enjoyment such as strolling,  jogging, cycling, fishing, sitting where appropriate. Points of interest or nodes such as landscaping areas, sitting out areas, lookout areas, boardwalks, and small piers which strengthen the vitality of the waterfront should be encouraged. The below photos shows the before condition and after the rejuvenation of the sabarmathi river front located in Gujrat, India.

The density gradient of the urban areas because of the industrialising processes led the urban pattern to spread which is termed as urban sprawl. As we can see the most urban areas in India including the capital city are widely under the influence of urban sprawl. This will degrade the quality of life by polluting the spatial distribution and deteriorating the environment and the natural ecosystem.

Adaptation of the design aspects of Urban fringe which is defined as the interface between developed urban areas and undeveloped rural areas will help the proper alignment and encompass the space planning. The general principle for development in a fringe area is to respect the natural environment, create an appropriate edge and to provide visual and physical linkages between urban and rural areas.

The linkages should be strong in order to promote the psychological well-being of the residents and thereby contribute to the quality of life.  Visual linkages should include major visual corridors to the surrounding natural landscape assets and should extend well into the heart of the urban area where possible.

Urban area today has become an arena of trending environmental issues and also a troubleshoot to the living conditions of an urbanite. The role of policy makers and the government bodies is very crucial and possibilities of the sustainable practices has to be studied for the urban areas to alleviate the present urbanisation issues. The above-mentioned parameters will help in understanding the possible solutions for the existing spatial patterns. The integration of these sustainable parameters will form an articulation to the urban living system.

What is Heat Recovery Wheel? How does it work? ( Frequently asked Question – IGBC AP / LEED...

Read More
You cannot copy content of this page